Home » microsoft office » powerpoint » how to make transitions in powerpoint

In this tutorial, I will show you how to make transitions in powerpoint, and I believe that after reading this article, anyone can do it by themselves.
Actually in PowerPoint there are a lot of fancy motion effects, but maybe you don’t know how to create these effects. It’s just that you don’t know, but don’t think that creating motion effects in Powerpoint is difficult. So, in this tutorial I will show you in detail how to create motion effects in PowerPoint, with just 3 steps, you can create your own beautiful effects. Let’s get started.

I. How to make transitions in powerpoint?

You click on the object to create the effect (1) => select Animations (2) on the Menu bar => select the effect you want to use. 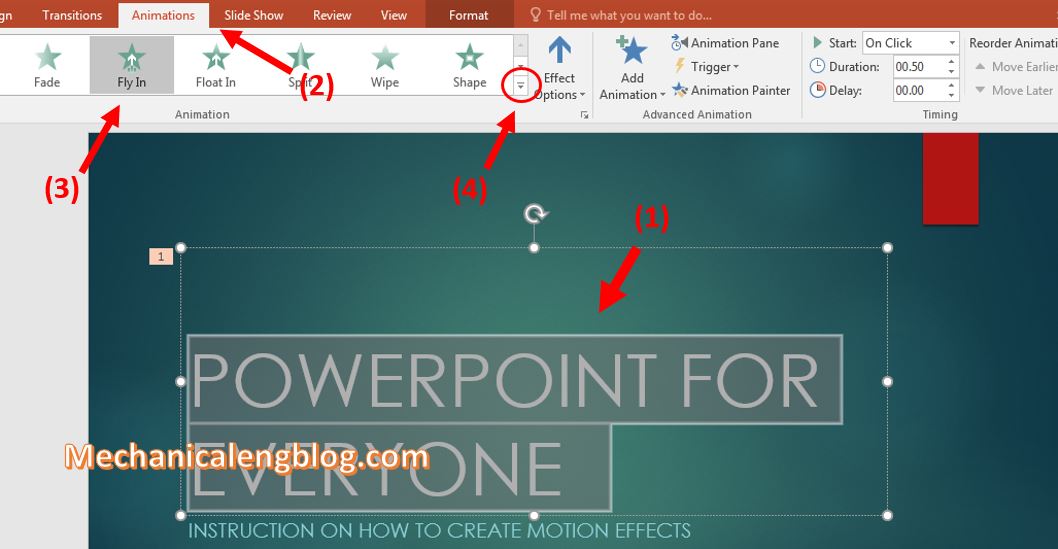 Note: You can click on the drop-down arrow (4) to see 90% of the motion effects. And in this table that appears, there will be sections for you to choose from:
None: By default there is no movement at all.
Entrance: The object will appear according to the type of motion you choose.
Emphasis: You can simply understand it like this: a class is lined up and you want to show off in front of everyone, you have to increase the dynamics to get attention 😛
Exit: This effect will be the opposite of Entrance. The object will disappear when you click the mouse.
Motion Paths: Effect of motion along the line: That is, you will draw any line in the effect frame of Motion Paths and it will move along the line that you draw.

How to preview moving objects? When you finish selecting the effect, Powerpoint will automatically show you that motion, but sometimes the Animations move too fast, you can’t watch or like to watch many times, then …
You click the star next to the slide frame or the word Preview above the slide as shown in the picture.

A question is when you create motion effects for many objects, how do you know which effect will appear first? Of course, if you do it, you remember it, but after a long time you don’t touch he Powerpoint file, it is also possible that you will forget it.
A simple way to identify the order of occurrence is the numbers next to the object. You can see the picture below to understand better.

Select the effect that you need to change then click the up / down arrow to change the order of appearance. Or you can also press and hold the effects and drag and drop them easily.

In addition, the Animation Pane also allows you to delete effects that you consider unnecessary.
Click the arrow down or right-click at the effect you want to delete and select Remove as shown above or you can press the Delete key on the keyboard. 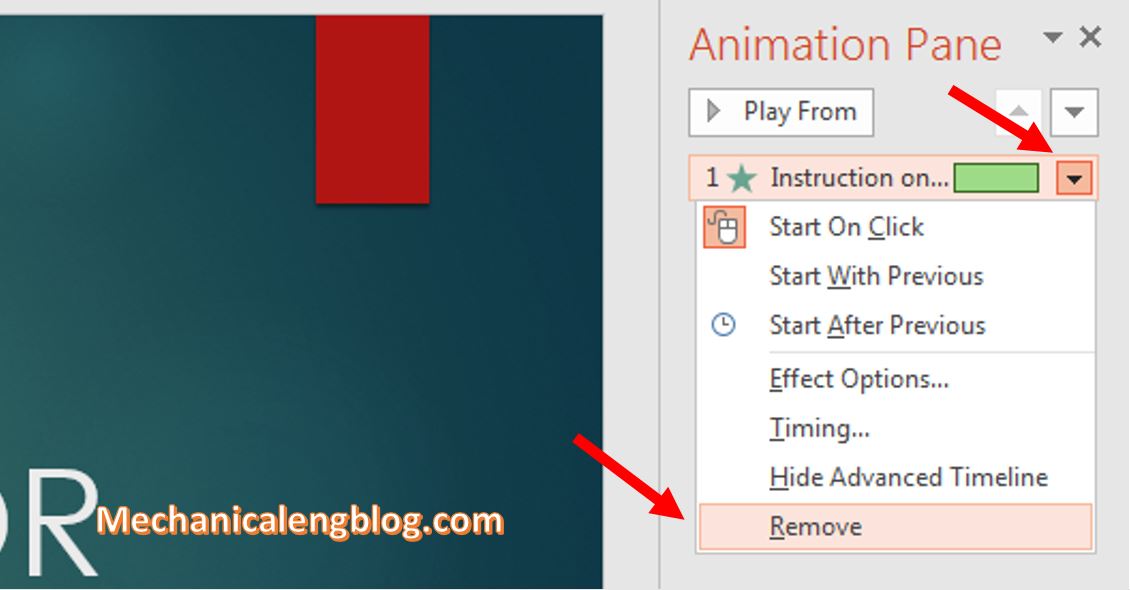 Some animation effects move at a very fast speed, so you want to slow it down a bit? Now you will need the Timing function to handle it.
You just need to adjust the time in the Duration box and everything will be fine
Duration: Effect duration.
Delay: Since you click after n seconds the effect will be done.

OK, that’s the knowledge for today. Guess I will end the sharing here. If you have any questions about the article How to create beautiful motion effects in PowerPoint with the Animations tool, please leave a comment below this article for timely support. And don’t forget to comeback because we gonna have more and more interesting articles with more useful knowledge to share.
Thank you and good luck !
-hhchi

How to make quiz game in PowerPoint

how to create slides in PowerPoint