If you are learning mechanical engineering, you must know about gear. In this post, mechanicalengblog.com   will introduction spur gear. You will know: What is a spur gear?, Why use spur gears? Limitations of spur gears 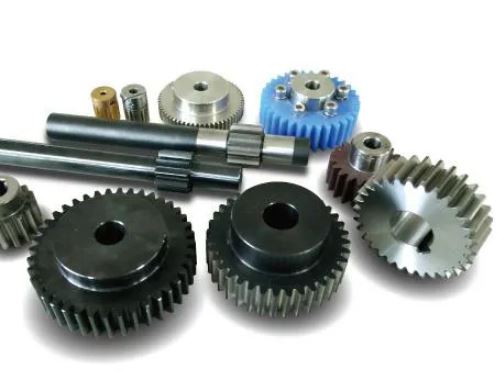 Spur gears are the most common gears founded in motivation between two parallel shafts.It is a type of gear used in various machines and mechanical systems to transfer power from one component to another. It is composed of two or more cylindrical disks with teeth cut into the circumference of the outer edge. The teeth are cut in an involute tooth profile, which helps them mesh together smoothly and efficiently. Since the teeth mesh together parallel to the shaft, no thrust is generated in the axial direction. In addition, due to the ease of manufacture, these gears can be made to a high degree of precision.

The unit of tooth size is called the module. The common pressure angle of spur gears is 20°. In general, this type of gear with the same modulus will engage with each other. However, the tooth profile can change as the center distance between the two axes changes. This helps to minimize grinding which reduces tooth life, noise, vibration or tooth slip due to less contact which maximizes gear transmission. 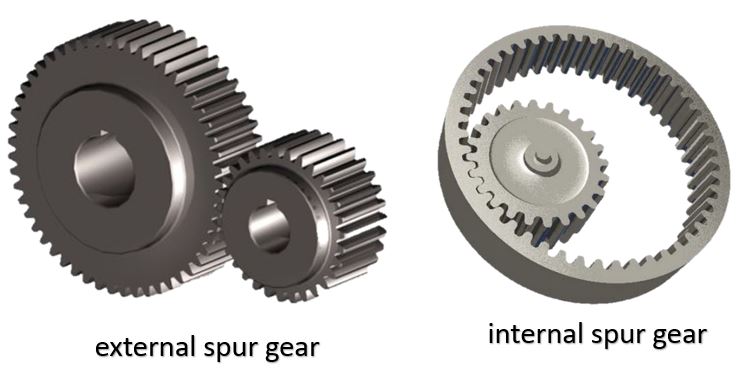 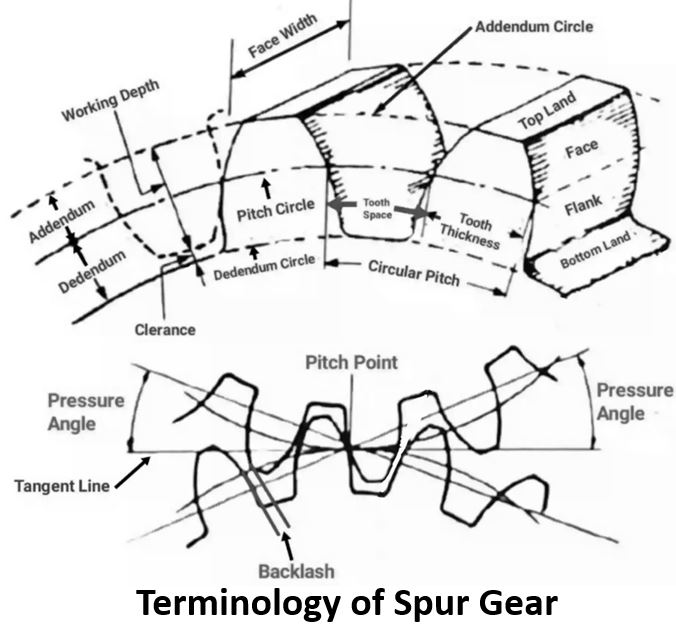 Top Land: The top most surface of the gear tooth.

Bottom Land: The bottom most surface of the gear tooth.

Pitch Circle: When two gears have meshed together, then the point on which one gear tooth is in contact with the tooth of the other gear is called the contact point. And the imaginary circle that passes through this contact point is called the pitch circle. The speed of the gear is measured here.

Pitch Circle Diameter (PCD) . The diameter of the pitch circle.

Module: A module (m) is defined as the ratio of pitch circle diameter in mm to the total number of teeth.

The formula of the module:  m = PCD/n  (Pitch circle diameter/number of teeth )

Circular Pitch (Cp)
The distance between a point of the tooth, measured at the same point in the adjacent teeth, is known as the circular pitch along the circumference of the pitch circle.

The formula of the Circular Pitch.

Addendum (A): The high of teeth where from pitch circle to addendum circle

Since we know that, Addendum is equal to the module. A = m

Addendum Circle: It is the outside circle which surrounds the outer ends of the teeth

The diameter of the addendum circle can be calculated by this formula.

The formula of the Clearance.

Dedendum (D): The distance between the pitch circle and the dedendum circle.

Dedendum circle (DCD): the root circle which surrounds the bottom of teeth.
The formula of the dedendum circle

Tooth Thickness(T). Tooth thickness is the distance that is measured along the pitch circle of two attached teeth.

Total Depth: Total depth is the sum of addendum and Dedendum.

Generally, pressure angle is used up to 20°.

N2 = Number of teeth in the driven gear

II. Why use spur gears?

The first reason is that it is very simple to install the spur gear. Secondly, this type of gear has high power transmission efficiency. Thirdly, people can easily make it, because of this it is quite cheap. Not only that, the straight cylindrical gear also helps to create high precision.

Spur gears are an important type of gear used in many machines and devices. In a typical machine, has a central shaft or axis, while the two gears are attached to the ends of the shaft. The two gears mesh so that when one gear turns, it causes rotation in the other gear.In a typical machine or device with spur gears, there is a central shaft or axis which is turned by one of the spur gear and then transmitted to another one through meshing teeth on each gear.The two spur gears can be connected at either end of their axes.

+ Simplicity: It has compact size, large power transmission capacity, and making simple process.
+ Reliability: High durability, application in the machine manufacturing industry. Easy to replace as well as to integrate in the machine system.
+ Efficiency: The working efficiency of spur gears is high from 97% to 99%.
+ Constant Speed Drive: The transmission ratio is always unchanged, and combining multiple sets of spur gears produces multiple gear ratios

Although these straight cylindrical gears have the machining of straight shaft gears, high precision is required. Requires high-precision manufacturing machinery as well as skilled workers.

Be some strength, they have some remarkable shortcomings. The first shortcoming which makes them become annoying is that they are too noisy when running at high speed. And the second is they are very fragile. Maybe you should buy a stockpile of spur gears to change when needed.

+ Spur gear are also used to increase or decrease the speed of an object. It can be used to increase or decrease the torque or power of an object.
+ It is used for transmission and force from one shaft to another in a gas machine structure. For this purpose, Spur gear are used in washing machines, mixers, tumble dryers, construction machines, fuel pumps and factories.
+ In power plants, so-called spur gear “trains” are used to convert a form of energy such as wind energy or water energy into electrical energy.
+ Spur gear are widely used in aircraft, train, bicycle, ball mill and workstation engines where noise is not an issue.
Some typical industrial applications include gear reducers, conveyor systems, reducers, motors, mechanical conveying systems, gear rotary machines, motors and machining tools.

simple planetary gear set how to work and calculate

How to design a chain sprocket by nx expressions

How to design sphere spring in Autodesk inventor?